After getting the basic structure down, I wanted to quickly add in some color to get a feel for the way each of the spaces would work together. I was going purely for the local color of everything, not wanting to get bogged down in considering lighting or texturing. Working with original material that was already so brilliantly designed and iconic made it easy to set each of the 3 worlds apart and make them immediately recognizable.

Adding color immediately made me aware of a problem area that took me quite a while to solve. I had liked the idea of showing Ben Kenobi turning off the tractor beam from my initial sketch—I immediately visualized having him sort of sneaking around in the shadows, a figure you may not initially notice with everything else going on, so having him to the side or a corner made a lot of sense. I had placed him on the left side of the original sketch, away from the other Star Wars parts of the image, which at first seemed like a good way to do a “Where’s Waldo?” kind of thing with him but the placement felt awkward.

When I started designing the basic structure, I moved the tractor beam all the way up into the top left corner, thinking that having it close to two edges that could potentially crop out areas that didn’t work together would help. It was definitely an improvement from my initial sketch, but my eyes kept going back to that corner. The elements just weren’t living with each other as comfortably as they were in other parts of the image. 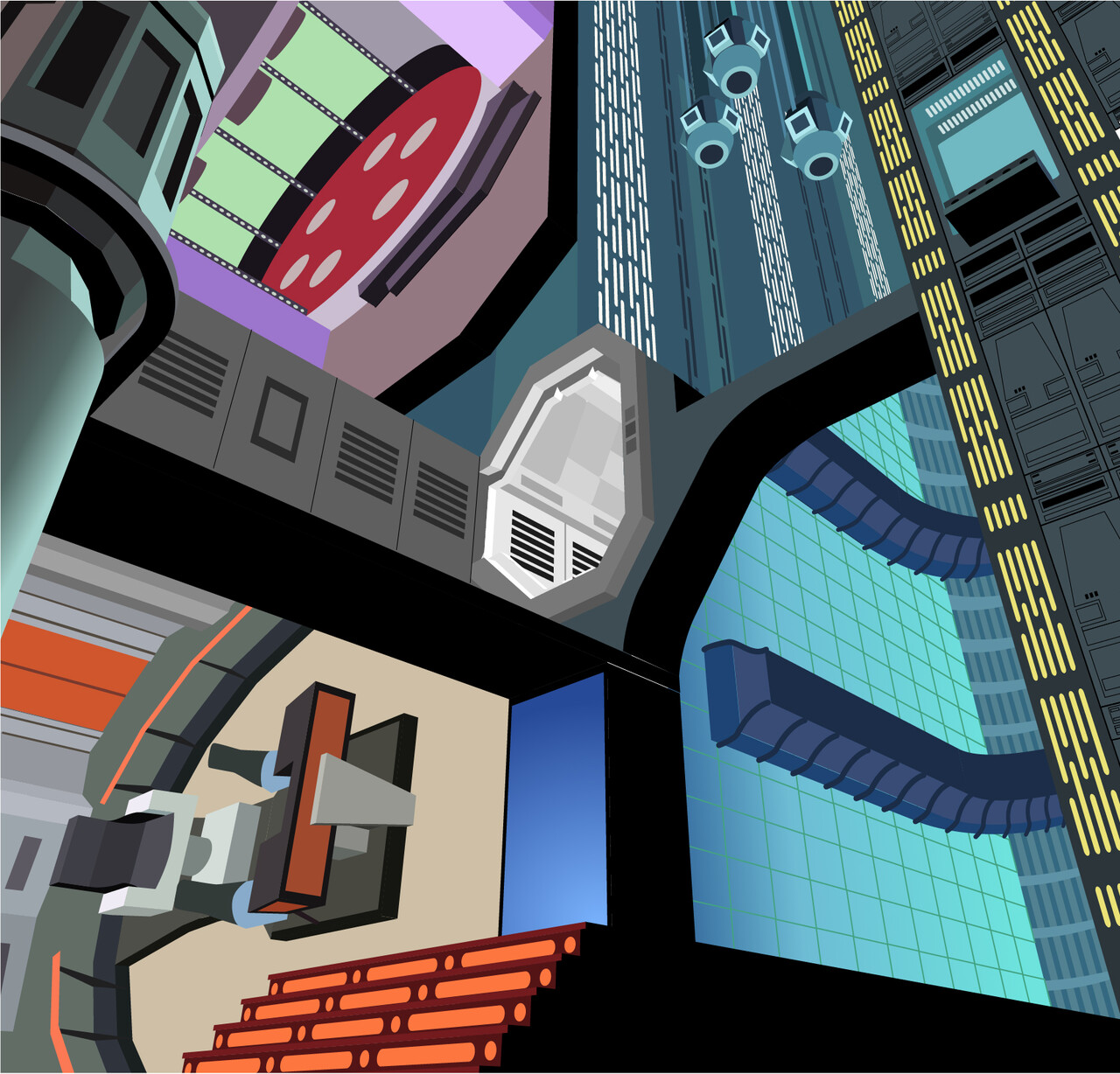 Another problem with the placement of the tractor beam was the distortion caused by the extreme perspective. With most  2 or 3-point linear perspective that attempts to simulate real world space, at least one horizontal vanishing point is usually pretty far off to one side or the other of the image, while the other point is either closer to the edge of the image area or even in the image area itself. In this case, all 3 vanishing points are equidistant from the visible part of the image and that makes things get weird FAST, especially near the edges of the image. In trying to place the tractor beam in the top left corner, the perspective distortion became so extreme that what was supposed to be seen from the side could only be seen from below. I did some vertical scaling to “cheat” my way into a side view of that space but it didn’t feel like the problem had been completely solved. The only way to determine if that solution would work at all was to figure out a way to get some reference figures into the image to see if they could “live” in the space I’d created so far.