A 3D artist I saw on blenderartists.org had created a 3D CGI version of M.C. Escher's image, Relativity. Escher has been an inspiration for a lot of my personal non-published work for a long time--it wasn't long after I started making digital art that I tried my hand at creating tessellations--so seeing the digital version of Relativity stayed with me for days.

I started wondering, "what if, instead of having 3 groups of people oriented to each of the 3 vanishing points in the image, a different world originated from each vanishing point?" That led me to think of the ways I could make those worlds distinct, yet have them all coexist within the same image.

As I was kicking ideas around in my head, I spent some time studying Escher's image to make sense of the perspective. The vanishing points form the vertices of an equilateral triangle, each edge of which is used as an horizon line, with the vertex opposite the edge serving as an upper or lower vanishing point. It’s actually a lot easier to see than explain: 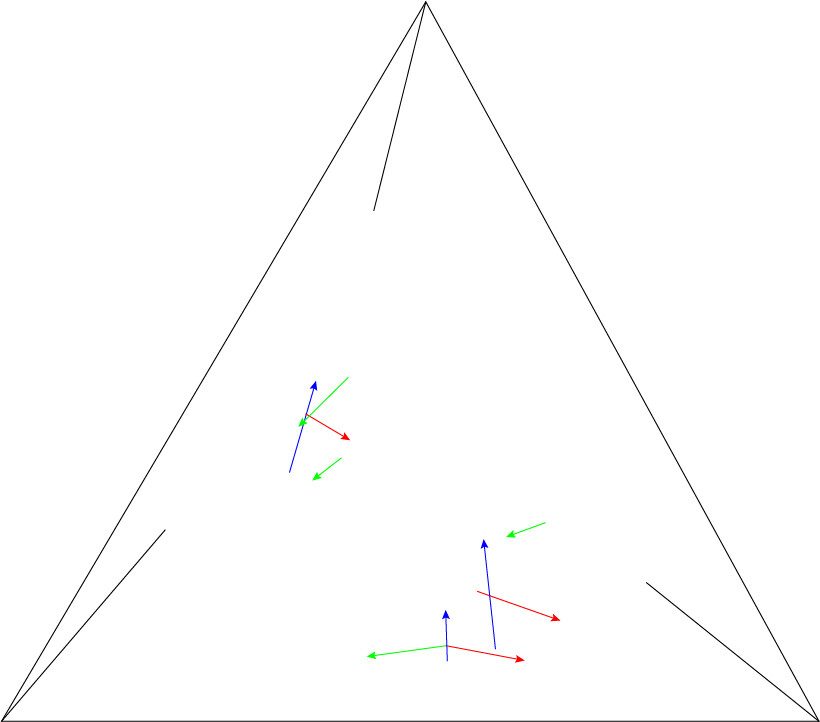 As I studied Relativity, my eyes kept going back to the figure walking up the stairs at the bottom of the image. I loved the way that figure seemed to lead the viewer into the image (at least that’s what it did for me.) I suddenly had a flash mental image of Luke Skywalker walking up the stairs to begin the climactic fight with Darth Vader at the end of Empire Strikes Back and I knew I had the beginnings of an idea.

It took a while to fully form, though. At first, I thought I might try to show the same moment from 3 different viewpoints (one idea was to show Luke’s hand being cut off from below, above and relatively straight ahead) but it seemed too confining and I still really loved the idea of there being 3 different worlds.

Thinking about Star Wars led me to think about all the other sci-fi/space fantasy stuff I grew up loving and how much influence it had in making me want to draw pictures for a living. It wasn’t too long before I wanted to try combining Star Trek with Star Wars. Star Trek has such a distinctive design that I thought it would be immediately recognizable and distinct while still complementing the Star Wars stuff coming from the other vanishing point. That left one more vanishing point to inhabit!

I’ve always been a huge fan of the original Alien. The movie itself is great and there is so much great design work from H.R. Giger, Moebius, Chris Foss that it’s always stayed with me. I had my third vanishing point.

I created a 3-color perspective grid in Adobe Illustrator and started playing around with adding quick thumbnail characters to it after importing it into Photoshop. The focus was primarily on the characters at this point, but what I soon found out is that the space is the star in this kind of image. That ended up reinforcing my choices for the 3 worlds—each of them is so immediately recognizable in their own right that there was plenty of material to draw from in the ships, environments and interiors from all 3 of them.

The result of this stage was a quick thumbnail that already enabled me to visualize the way everything could work together: 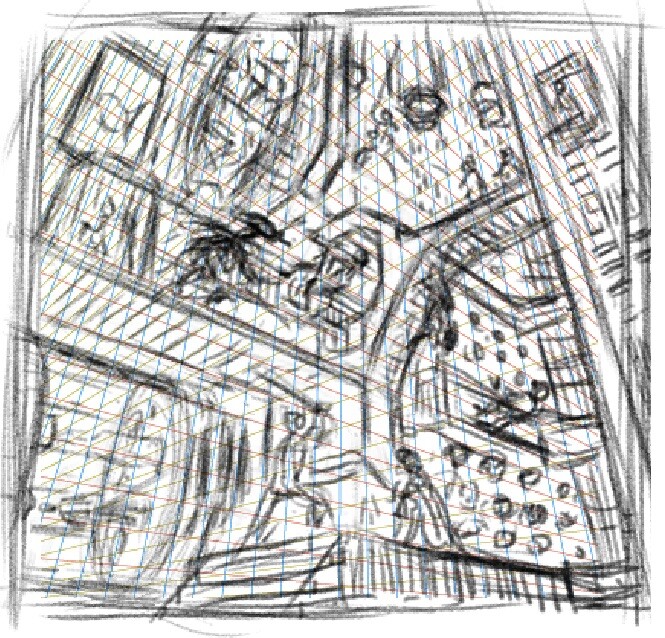 The next step was to create an underlying structure that would work being seen from 3 different directions.